Have a read all about us...

The Community Hall is run by Billington & Langho Community Association ( BALCA) the objects of the Association are::
To promote  the benefit of the inhabitants of Billington and Langho and the neighbourhood  without distinction of sex or political religious or other opinions by associating with local authorities voluntary organisations and inhabitants in a common effort to advance education and to provide facilities in the interests of social welfare for recreation and leisure time occupation with the object of improving the conditions of life for the inhabitants of the area.

The Community Centre is very much taken for granted today but it has not always been the case. The first mention of a Community Centre dates back to the Parish Records of 1907 where it was stated that a Community Hall was needed and that efforts would be made to build one. In the event it was another 84 years before the centre was finally opened in 1991 and this was only due to the dedicated efforts of a small team of villagers over a 10 year period. As is often the case the catalyst was relatively minor, in 1981 the Village Playgroup was given notice to quit the Methodist Church in Langho and they did not have an alternative venue. Consequently a group of villagers from Billington and Langho got together and formed the Billington and Langho Community Association (BALCA), united in the aim to build a non denominational Community Hall for the use of all in the parish.

Over a period of 10 years BALCA raised money from numerous events such as Summers Balls, Hoe Downs, A Raffle for a flight on Concorde through to simple door to door collections.

In the mid 80's land was purchased from a local landowner. The land was adjacent to St.Leonards church and it was acquired through the Parish Council taking a loan. Once the land was bought the fund raising went into overdrive but it was realised that a great deal more money was needed for the dream to be realised. In the 90's local government encouraged village based organisations to build and maintain Community Halls with the emphasis on build and as such would provide substantial funding provided that the organisation could demonstrate a need and raise a good proportion of the funds required. 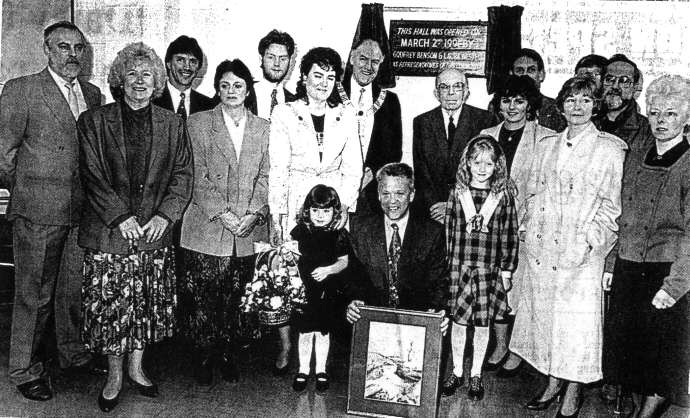 So it was in 1988 that an opportunity existed in the following year to obtain substantial funds from local government as the BALCA proposed Community Centre was the only new build in Lancashire and that priority for funding would be given to that project. Pledges of support came from Ribble Valley Borough Council, the Parish Council and numerous ather bodies. The deadline for having all the funding in place was March 1989 and the promise of money poured in but by the end of January 1989 it was realised that BALCA had a shortfall of about £17000 which is a lot of money now and substantially more then. Urgent phone calls were made to everyone in the village to provide interest free loans to BALCA to bridge the gap in funding and yet again the villagers rose to the challenge and the requisite funds were raised. All loans  to individuals have long since been paid back as required.

In March 1991 the brand new and shiny Billington and Langho Village Hall was opened by Leonard Benson being the oldest resident in the village and Laura Westell being one of the youngest.

Please don't take the Community Centre for granted, it is only there for you to use by the hard work of individuals in the past who made it happen and those now who give of their time freely to ensure that it is available to you.  If you feel you can help in any way, or are new to the area please email us on :  info@billingtonlangho.org.uk

We are hoping the new website will be an important link for the community. We need new ideas and younger members to keep the hall vibrant.
If you would like to join the committee please Tel 07966 425504.
Ways you could Help: